A solar panel looks so simple to the naked eye, but how does something this thin convert sunlight to energy? To find out, let’s dig into the materials that make up a solar panel.

What are Solar Panels Made of?

Solar panels are made of several layers of material. The top layer of glass protects the individual smaller units called solar cells. Solar cells have two layers of semiconductor silicon. Silicon gathers electrons and allows them to move around through a positive and negative charge. Each solar cell is interconnected to form the solar panel. 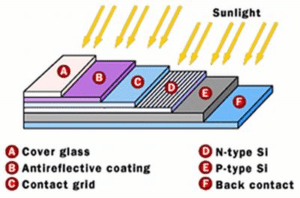 How Does a Solar Panel Generate Power?